Center for Leadership and Management 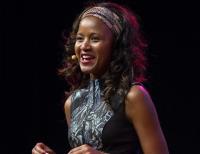 About Nkandu Beltz
At a Glance

There is no doubt about the fact that the world is in the lack of inspirational people who can motivate and encourage others from the core and boost their personal development process. Nkandu Beltz has emerged as one of the few inspiring individuals in the world who has built hope among the youth that changes can happen, and it starts with the self-discovery.

• She is considered to be a storyteller
• She has won awards for being a real leader, motivational author, inspirational speaker and a philanthropist
• She is the most acclaimed name among the leadership speakers
• She inspires people to live a balanced life
• She believes that young leaders can change the course of the world
• She is thoroughly connected with non-profit organisation G200 Association that make her be counted as a social change maker

• She has conducted number of workshops on self-confidence development in Perth
• She has been a talk show host of a motivational TV series called 'Home Here.'
• She has given several public speeches on effective leadership and team building qualities
• Carrying out effective youth coaching is one of her fortes
• Appeared as guest speaker for well-known events in Australia
• She has two books in stores named as ‘I have the Power' and ‘Fierce & Fabulous.'

There are no reviews for Center for Leadership and Management. Write a review now.